Ministerial Mandate Letters: What Do They Mean for Communicators? 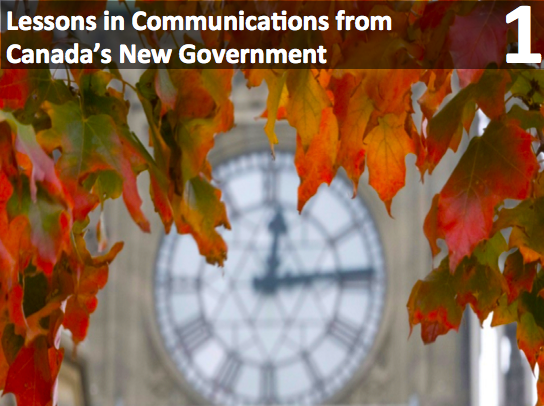 On Friday, Prime Minister Trudeau outlined his marching orders to his ministers through the unprecedented move of publicly releasing the Ministerial Mandate Letters. These letters hold important signals for government communicators:

Form follows function. The PM has repeatedly emphasized his commitment to transparency. His decision to publish the Ministerial Mandate Letters online (a Canadian first) is a clear example of form following function – the government is not just talking about transparency, it is intentionally behaving in a transparent way in order to bring the commitment to life.

Repetition of messaging. What is immediately striking in the 30 Ministerial Mandate Letters is that at least half of the text is exactly the same in all of them. The text sets out detailed expectations around how Ministers operate, stressing a commitment to bringing “a new tone to Ottawa.” While some have been critical of the approach, this repetition of key messages is central to the Liberal government’s meteoric success to date – proof that consistent, coherent and compelling messages work.

Communication is about emotion. While the content of the Mandate Letters includes specific directives, there is also a strong overlay of emotional messaging. There are references to “personal commitment”, “values”, “trust” and “empowerment”. The letters illustrate the axiom that effective communication happens at the point of intersection between intellectual and emotional content.

Open by default. The letters set out an expectation of radical openness and transparency, in which the “government is open by default.” The Mandate Letter to the President of the Treasury Board provides more detailed instruction for government communicators in actualizing this vision of openness, calling for a modernized Communications Policy, an enhanced focus on digital communication and an expansion of access to information.

Collaboration is a requirement. Through these Mandate Letters, all Ministers have received a clear message that collaboration and “meaningful engagement” with key partners such as stakeholders, opposition members, the public service and journalists is a fundamental expectation. Indeed, the Prime Minister stresses “All journalists… contribute in an important way to the democratic process. Your professionalism and engagement with them is essential.”

Expectations are clear – and are set high. It’s evident that expectations of Ministers, the public service, and by extension, government communicators are set at an all-time high. The letters convey that sense of standard both implicitly and explicitly – in fact, the word “expect” appears fully 21 times in the text.

Risk will be tolerated. Interestingly, the Ministerial Mandate Letters acknowledge that mistakes will happen. Ministers are reminded that “Canadians do not expect us to be perfect – they expect us to be honest, open and sincere in our efforts to serve the public interest.” The signal here is important for professional communicators working in an unprecedented, dynamic playing field – you are asked to try new things, and while perfection is not the goal, there is an expectation of experimentation and humility.

In the end, the message for communicators in the federal public service contained in the Mandate Letters is plain: you’re not just being asked to play the game differently, you’re now playing an entirely new game. You used to be playing chess; now, we’re playing Twister. Get ready. 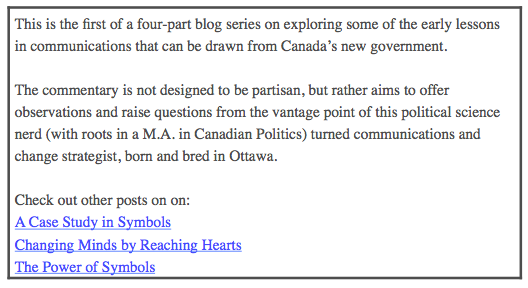 Next Wednesday at this time I’ll be in the midst of delivering my all-star presentation at the World Conference of the International Association of Business Communicators in New York City. I’ll be among 1200 professionals sharing ideas, learning about new innovations and feeding our passion for all things communications.  It’s the largest gathering of communicators […]

Messaging is the unsung hero of communications. I am struck that with few exceptions, organizations tend to invest relatively significant amounts of time, effort and money on communication vehicles (such as websites, brochures, annual reports and speeches) with relatively little focus on the core product of those vehicles – messages. That strikes me as a […]

When you combine a communicator’s instinct to deliberately plan for communications, with the rapidly changing environment we find ourselves in these days, the two can be hard to reconcile.   Here are 4 things I try to remember when planning in a world that keeps changing:    Plan to re-plan. Think about progress, not perfection or evolution […]