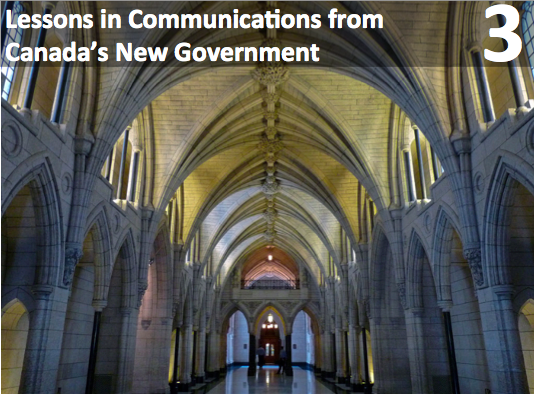 At its essence, the election was about change – the Liberals set out to convince Canadians that a change was needed, and that they were the best alternative. They succeeded, in large measure, by recognizing a fundamental truth of change communication:

Experience tells us that it’s futile to try to change people’s minds – the key is to work on changing the conditions, such that they change their own minds.

Consider this: If you had decided who you were going to vote for at the beginning of the election, could anyone have changed your mind? If your spouse, neighbour or colleague told you that you should really vote for another party, what effect would that have? What if a candidate told you to do so? Likely that would merely serve to entrench your original position. But if you read various articles, followed social media feeds, listened to interviews and engaged in conversations, you might just find yourself immersed in conditions that cause you to change your view.

And this is exactly what happened in Canada last month, millions of times over.

Through a sophisticated campaign with tight messages spread consistently and repeatedly across multiple channels, the Liberal party created an environment that was ripe for citizens to change their minds. And change they did – when the writ was dropped on August 2, 2015, 26% of Canadians reported an intention to vote Liberal, a figure that rose to 39.5% of the electorate supporting the Trudeau bid on Election Day.

What were the change communication dynamics at play? Here are a few key aspects:

As federal communicators will increasingly be called upon to lead transformation through their work, these lessons in change communications from the new government are instructive, both in their approach, and in their remarkable efficacy. A critical part of being a good manager or supervisor is being good at communications.   Improving your own communications skills can help contribute to the overall performance of your team. We’re often asked about it, so we’ve put together our top 5 favourites: BE PROACTIVE.  Take the initiative to reach out.  If you don’t […]

One of the most powerful shifts you can make to sharpen the focus and impact of your communications activities is in how you think about audiences. Traditionally, in a communications plan, you’ll see a list of audiences presented in a linear fashion. Very often, it looks like a massive laundry list of everyone we might […]

The question I get asked the most these days is: “What do you notice about how communicators have been affected by COVID?” Here are 5 main observations I’ve gleaned from conversations with communicators (via our consulting, coaching and webinars) over the summer: 1. Gaining New Executive Access Let’s start with the good news. I am […]