A Case Study in Symbols 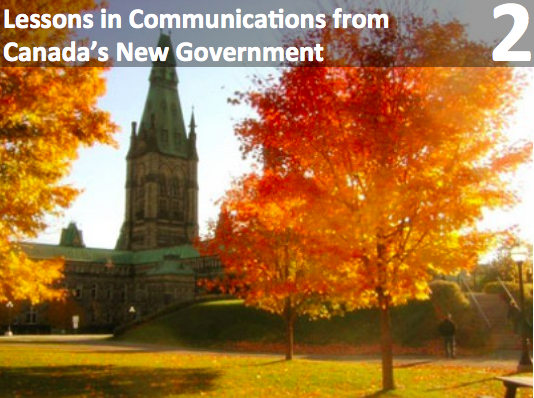 As we arrive at the one-month mark after the election, it’s been fascinating to watch the first days of the new government’s outreach efforts, which provides an unparalleled front row seat in a master class in the use of symbols to communicate change.

One of the fundamental principles in change communication is that it can’t be all about words – truly effective communication in a time of transformation rests on a combination of words, behaviours and symbols. As audiences grasp to create meaning in a shifting environment, it’s vital to connect beyond the rational level of the narrative, and create a connection by communicating through action, and through symbols.

The most striking example of this strategic use of symbols lies in the semiotics of “open government” incorporated into the official swearing in ceremony for Cabinet. From the open invitation to citizens to view the event from the grounds of Rideau Hall (complete with jumbo screens and hot chocolate), to the scene of Ministers arriving by bus and walking en masse behind their leader, to the prominent podium from which the Prime Minister answered questions after the ceremony. The event included a number of symbolically significant nods to several key values, including celebrating Canada’s indigenous traditions through the performances and embracing the philosophy of “digital by default” in broadcasting the event live on Periscope.

It’s interesting to assess the impact of these symbolic gestures in a temporal sense. During the election campaign, key Liberal platform ideas (such as open government, transparency, accountability, respect for Indigenous peoples) were expressed in words. The evidence before us is that clearly, the communications strategy was effective in translating to a majority win.

What’s more interesting as citizens (and as audiences of messages) is to consider the visceral experience of the shift from words to symbols in the new government’s change communication that has occurred since the Liberals have taken office. The same ideas that had been expressed through words are now brought to life through symbols. Reaching Canadians through their hearts, rather than just through their minds has generated a remarkable and palpable groundswell of support and citizen engagement.

Time will tell how the story will unfold. One thing is certain: the new government provides an extraordinary case study in the power of symbols in communicating change, one that communicators both within government and outside should take the opportunity to learn from. Avoiding the Curse of Knowledge: How to Create Shared Meaning During Change

The “curse of knowledge” is an insidious trap of organizational communication. The expression refers to a pattern that we observe regularly – a leader is so deeply knowledgeable about a topic that he cannot see the gap that exists between his level of familiarity with the subject and that of the employees around him. While […]

Turning Consulting on Its Head: The Case for Change

Sometimes, the source of the message matters more than the message itself. Take the time to deliberately plan your communications so that the source of information is not left to chance. Consider, for example, the experience of finding out about layoffs from the grapevine, or via email, as opposed to learning the news in a […]